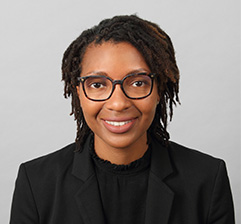 Sheena Gordon earned her Bachelor of Arts degree in History at the University of Maryland, College Park.

She earned multiple graduating honors including the Order of the Barristers, an award granted to only ten students per graduating year, for her excellence in oral advocacy and brief writing. She was also awarded the William P. Cunningham Award, for her exceptional achievements and service to the law school.

In her free time, Sheena enjoys working out, baking, traveling, and playing board games. She has also become an avid golfer and looks forward to hitting the links as often as she can.

Once she completed her Circuit Court clerkship, Sheena was granted the prestigious opportunity to clerk for the Honorable Melanie Shaw-Geter of the Maryland Court of Special Appeals, where she drafted multiple opinions in all areas of law, including family law matters.