How To File For Divorce In Maryland

Steps To Filing A Divorce In Maryland

While it is important to work with a skilled divorce lawyer to ensure that you follow all the laws and leave yourself in a favorable position, you can complete some of the simpler steps of a divorce on your own.

Determining The Validity Of The Marriage 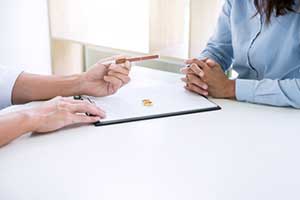 In order to file for a divorce in Maryland, you must first determine whether the marriage was valid. This may seem like a given fact, but the truth is that some people have been married (in Maryland or elsewhere) within contexts that may allow the state to annul the marriage rather than having the parties file for divorce.

Marriage Is Void If Spouses Are Too Closely Related

A marriage is void if the spouses are related too closely, either by birth or by marriage. Similarly, if either party was unable to enter a legally binding contract due to mental incompetence at the time of the marriage, it may be void. Marriages are also void if a spouse was married to another person at the time that the marriage contract was signed. In these situations, the union is entirely void; in other words, the marriage is not and was never valid.

Some other situations exist, however, in which the marriage may be voidable if an annulment is brought within a certain amount of time; after this time, the union becomes valid. These situations include when a marriage is consented to as a result of duress or force, or if either party did not understand consent. If a spouse was physically unable to consummate the marriage, the partner may choose to bring an annulment. A marriage is also voidable if the person who performed the ceremony did not possess the legal authority to join two individuals or if either party was under the age of 18 at the time of the ceremony. Minors aged 16 and older may marry with parental consent.

In these situations, the person who was victimized is permitted to file for an annulment of the marriage if they so choose. However, if they are happy with their marriage, they may elect not to annul it and the legal contract is valid. Even if your marriage is annulled in lieu of divorce, individual property rights remain in place and you or your spouse may be responsible for alimony and child support, if applicable.

Options For Divorce In Maryland

Most commonly, marriage will be deemed valid and you will need to proceed with a regular divorce filing. In Maryland, you have a few options when considering separating from your partner: a limited divorce or an absolute divorce. 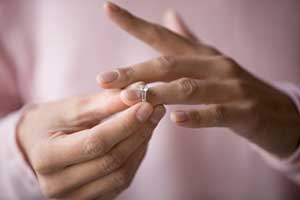 In a limited divorce, you are seeking legal separation. Maryland courts will review the evidence in your case and may grant a limited divorce based on evidence of abuse or cruel behavior, either to the spouse or to a minor child. Similarly, desertion—either voluntarily because of irreconcilable differences or constructive desertion where one person is forced out of the home—is grounds for a limited divorce.

Absolute divorce, in contrast, is a permanent separation that can be finalized and result in a complete dissolution of the marriage. A number of possible situations can result in an absolute divorce in the eyes of the court. One such situation is when a partner is found to be legally insane and confined to a mental institution or hospital for at least three years. If this is the case, Maryland divorce law requires that at least one of the spouses must have resided in the state for two years and that the person held for insanity has behaved inappropriately. This can be accomplished by demonstrating a history of criminal convictions, a history of abuse, or proof of cruelty toward the spouse or a minor child.

In other contexts, someone who has deliberately deserted the household for a period of at least one year or who has forced out their spouse due to misconduct can be grounds for an absolute divorce. Adultery is another reason why absolute divorces may be granted; however, the state of Maryland is stringent on its requirements for evidence in the case of adultery.

If you would like to file for divorce on these grounds, the court is allowed to grant the divorce immediately and with no waiting period if you are able to prove your spouse’s unfaithful conduct. While there is no need to directly prove that sexual intercourse occurred, it can be helpful. In the absence of direct evidence of this behavior, the court will also accept proof of public displays of affection toward another person as well as opportunities in which the spouse could have behaved in sexual ways with a non-spouse. For example, proof that a spouse entered someone’s residence at night and left in the morning may be sufficient to demonstrate that adultery could have taken place.

Text messages, online postings, emails, photos and voicemails are commonly accepted by the court. However, acceptance of these materials is at the court’s discretion. If the adulterous spouse has a child with another person, that child’s DNA is sufficient evidence to grant an immediate divorce.

Other cases of absolute divorce come about as mutual consent; in other words, the two parties agree that they would like to divorce due to irreconcilable differences. This is only allowed if the two do not have any children together. Both parties must agree to appear before the court for a hearing and they must submit a settlement that they have both agreed to that documents their approach to alimony, property and the handling of other relevant issues.

Once you are ready to begin with divorce proceedings, you will need to consider which method works best for your situation. This is the stage at which relying on the skill of a lawyer will become critical, as even the most amicable of separations require significant legal work. 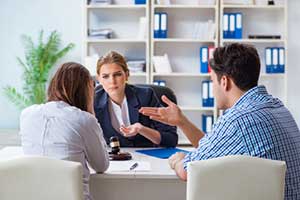 If a couple elects to work together to divorce, they may speak to a mediator who can resolve any remaining conflicts and will help them to complete a Separation Agreement. This avenue tends to be the easiest and least expensive, since it settles the issue outside of complex court battles and lengthy legal proceedings. Once the mediator has assisted the couple in creating the Separation Agreement, each spouse must take it to an independent lawyer.

They are not permitted to use the same lawyer, so it is important to be in contact with your spouse about which firm they have selected. It is also important to remember that any sexual interactions before the divorce is finalized—even after the Separation Agreement has been drafted—constitute adultery.

Filing A Complaint With The Court

When pursuing legal action, your first step is to file a complaint with the court. This should include the date and location of the marriage, information (such as age) of any children, how long you have lived in Maryland, why you are electing to divorce, and any monetary compensation (such as alimony or child support) that you are requesting, alongside proof of income and expenses. Once this step is completed, a copy of the complaint is sent to the other spouse, as is a summons.

If both parties have agreed to a divorce and the process is not contested, a Master-Examiner will review the case and determine if a divorce should be granted. The spouse who received the summons is not required to appear, though they may choose to if they wish. If the Master-Examiner determines that a divorce should occur, he or she will recommend a judgment to a judge, who will pass the final decision after no more than a few weeks.

The Discovery Process (If Divorce Is Contested)

If a divorce is contested (if both parties do not agree to the divorce), the case will move on to trial. At this point, a discovery process begins that could take multiple months as evidence is gathered. Both parties are required to attend a conference and may also be obligated to attend a mediation session in an effort to resolve the conflict. If no agreement can be reached, a trial begins.

Both spouses will testify and be cross-examined, and witness statements will be taken. The judge will determine the outcome of contested issues such as property and alimony. Because this process is much more complex than amicable separation, it is also significantly more costly. When possible, avoiding extended battles in court during a divorce is a worthwhile option, so working with a mediator can be invaluable.

Reach Out To An Experienced Divorce Attorney

When you are trying to sort out the process of a divorce, the legalities and requirements can quickly become overwhelming. You may believe that you are doing everything correctly only to learn that a seemingly minor decision has long-lasting negative repercussions on your case. For this reason, it is important to work with a skilled divorce attorney who can guide you through the complexities of this legal battle.

If you need help with your divorce, reach out to SIEGELLAW. We would be happy to assist you in filling out the appropriate paperwork and presenting your case in the most effective manner so that you see the best possible outcome. Leave the complex legal matters up to us so that you can focus on setting up for success after your separation. Reach out to the experienced Maryland divorce attorneys by calling 410.792.2300 or by requesting a consultation online.