While an increasing number of states are enacting pet custody laws in family law cases, Maryland is not among them. Here, pets are treated like a chair, desk or computer, as property. While we cannot dispute the unfairness, we have to deal with the reality. If you are divorce planning and want to keep the pet(s), you will need to think like a divorce attorney, or better yet, a family law judge.

Disputes over who retains the pet can become contentious during divorce or separation proceedings. Will one spouse keep the pet exclusively or will ex-spouses share custody? Can the court even decide who gets the pet? Who will pay the vet bills? 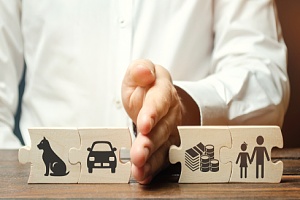 Recently, several states across the country have enacted pet custody laws, changing the standard for determining who gets the pet from a traditional strict property analysis to one that takes into consideration the well-being of the animal. This elevated standard can require courts to consider the best interest of the animal when awarding possession during divorce or separation proceedings. The “best interest” standard is the same standard used to determine child custody issues.

Not so in Maryland. Courts may inquire into who owned the animal first or whether it was purchased together, as well as what paperwork exists as to the “ownership” of the pet, in order to determine who keeps the pet.

You may think that courts will also look at who assumed most of the responsibility for the pet’s care and spent most time, the best living arrangement for the pet, and if children are involved in the care of the animal, the nature of their attachment to the pet, but alas, these factors are only relevant in the six states (Alaska, California, Illinois, Maine, New Hampshire and New York) that have pet custody laws.

What Can You Do? 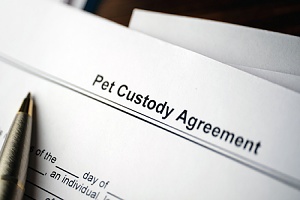 While it can be heartbreaking for pet owners to learn that their precious pet will be treated the same way as a car or furniture in the court’s eyes, careful planning can help prevent this emotional anguish.

An emerging thought is for pet owners to have a separate independent written pet ownership agreement signed by each owner at the time the pet is purchased. These agreements can be as simple as ownership, or they can include such additional issues as payment of expenses, as well as pet visitation schedules.

If you do not have a pet agreement, then, if permissible under your state’s laws, consider inserting pet ownership and custody designations into prenuptial, postnuptial or settlement agreements.

No matter what, consider your pets and their ownership from the time of their initial purchase and thereafter to ensure that you do not end up at a divorce trial, trying to figure out—who gets the pet.

Reach Out To A Reputable Divorce Attoney

If you have any questions about pet custody during a divorce or if you are currently going through the process and need assistance from a reputable divorce attorney, contact the professionals at SIEGELLAW. Contact them online or over the phone at (410) 792-2300