What Is Divorce Mediation? 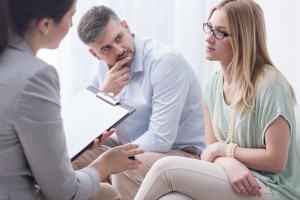 During divorce mediation, both parties meet with a neutral, and often, court-appointed third-party to work through disputes and ideally reach a settlement agreement that both parties find fair. Divorce mediation is considered a more peaceful alternative to traditional divorce negotiations and can prevent spouses from having to enter a courtroom. Mediation is often less expensive than a court trial, more confidential and enables spouses to arrive at a mutually agreeable resolution. The concept behind divorce mediation is self-determination–resolving your disputes together with guidance, as opposed to going to trial and allowing a stranger to resolve your marital disputes.

One of the most common causes of conflict between separating spouses is the division of marital assets. Deciding how to fairly split up property, bank accounts and other assets can be tricky, especially when both spouses want the same piece of property or when there are issues, such as the value or source of the asset.
When dealing with a high net worth divorce, the distribution of assets can become even more challenging due to the sheer amount of money and assets that need to be divided, as well as their complexity
Divorce mediation focuses on disclosure, involvement, communication and compromise. A mediator will urge both spouses to listen to one another as they state what assets they would like and why. A mediator can then help the couple divide the assets based on value and emotional significance, as well as being consistent with the laws of the State of Maryland. 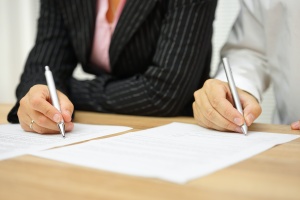 If a divorcing couple has minor children during their time together, child custody must also be established during a divorce. Child custody can be a complex topic to resolve, as both parents generally want to be in the child’s life. However, some spouses may not want to share custody or may want to control parenting time. This can cause tension between spouses and stress for any children involved.

During divorce mediation, a mediator will allow both parents to make their case before stepping in and encouraging the parents to do what is in the best interest of the child. Mediation aims to emphasize the importance of mutual cooperation and respect between parents for the benefit of the children. A mediator may encourage the spouses to make a decision that allows both parents a fair amount of time with each child or whatever arrangement the parents agree meets their children’s best interests

Divorce mediators can also assist parents in child support matters. The topic of child support can often lead to disagreements when one parent does not want to pay the amount the other is requesting. Through mediation, both parents can gain a better understanding of the child’s financial needs post-divorce and how each parent can do their part to ensure that the child’s meets are all met while remaining consistent with Maryland law. The child support guidelines of Maryland often dictate, or at least begin the conversation of what is appropriate child support.

Mediators will often remind parents that running two different households following a divorce can result in significant lifestyle choices that impact spending habits. Each parent must reevaluate their finances and learn how to manage their individual income to cover bills and other obligations. It is clear that running two separate households is more expensive than running a single household, which may leave each spouse with difficult decisions after the divorce process ends.

When going through a divorce, spouses may be required to share the assets in their retirement plans. Even if both spouses agree to divide the marital portions of assets in an IRA or qualified retirement plan, it is important to understand the unique process based on the type of account. For example, IRAs are divided through a process known as “transfer incident to divorce,” while 403(b)s and 401(k)s are divided under the “qualified domestic relations order.”
The complexities surrounding the identification and division of retirement assets are often beyond the knowledge level of a divorce mediator. It is incredibly important to have your own experienced divorce attorney providing advice to you, as well.

Handling taxes can become complicated during and after a divorce. The spouses will need to decide how they will want to file, whether jointly or separately, and who will get to take the dependency exemptions if there are children involved. It is also important to consider any unpaid taxes that are owed.
A highly experienced divorce mediator will go over how taxes may be handled based on the unique circumstances of the divorce and provide guidance on who should pay any taxes owed and who should claim any dependencies.

How Long Does Divorce Mediation Take? 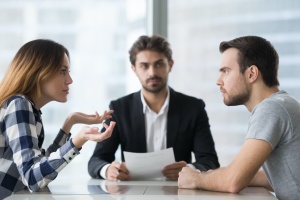 Divorce mediation can be an effective way for spouses going through a divorce to resolve certain issues they may have regarding child custody, child support, distribution of assets, retirement fund allocation, taxes and similar issues. In order to take advantage of the benefits of divorce mediation, each spouse needs to want to settle, be informed on each issue, speak to his/her own attorney to prepared for mediation and be ready to compromise, if necessary.